What I wear on the river

Features of a good river SUP

Using a leash on the river

If using a SUP leash on the river NEVER attach it to your leg (ankle, calf, etc.). If the leash wraps around an obstacle during a swim, the river current could prevent you from being able to free yourself. SUP leashes designed for use on the river have an easy-to-operate quick-release system and should be connected at or above the waist. Before choosing to use a leash conduct your own risk assessment — weigh the likelihood of an entrapment hazard vs the hazard of getting separated from your SUP — and make sure you rehearse pulling the release in the event you have to use it!

How to store your Hala Inflatable SUP

There are several options for board storage based on the amount of storage space you have to work with. Ideal scenario is that the board is stored inflated at roughly half pressure in a cool place that does not have exposure to large temperature changes…

To Leash Or Not To Leash?

The debate about wearing leashes on river SUP boards is loud and is heard both on the water and in Internet chatter. It goes something like this: “Leashes are death traps, don’t use them.” “No, leashes save a bad situation from getting worse, wear them always.”

October typically marks the end of paddling season for many. If you’re not quite ready to put your board away yet, here are some cold weather paddling tips.

As a river flows past an obstruction, water backfills the space downriver of it, forming an eddy. In order to effectively and safely move in and out of eddies, paddlers need to better understand the hydrology of these features.

How to Read a River Gauge

As a rookie, my modest affinity with the Arkansas meant I had to wait for the head boatman to open the boathouse and write the metrics on the board. I wondered, out loud, where he got those numbers from…

How to Face and Transform Your Fear with Anna Levesque

“Fear reduces our vision to tunnel vision. Tunnel vision keeps us stuck in a rut, unable to see the big picture. We may not even see that there’s an alternate path or life line right beside us because we are so gripped with fear. If you’ve ever participated in a sport that requires looking ahead: kayaking, SUPing, mtn biking, skiing, snowboarding, trail running etc… you know what I mean. Out on the water and the mountain looking down with tunnel vision can lead to disaster.”

In this webinar, world-renown professional paddler, yoga teacher and mindfulness coach, Anna Levesque discusses strategies for how to face and transform your fear. Lecture followed by Q&A. Recorded live May 17, 2020. Available for $5.00 through the California Watersport Collective eStore.

P stands for POSITION on the river in relation to the eddy line. When crossing eddy lines, either entering or exiting, aim for the ‘top’ of the eddy. You will need to anticipate the movement of the board resulting from a combination of the current and paddle strokes when setting up. Therefore the starting POSITION is critical for the overall success.

A stands for ANGLE of the board in relation to the eddy line. Although 45 deg across the current is a common way to conceptualize the optimal angle, I find 90 deg to the eddy line is more precise. This requires the paddler to have the ability to visualize the eddy line during the approach so they can ‘square up’ to it.

V stands for VISION. Throughout the maneuver maintain the focus of the eyes on a spot a couple of feet above the water and approximately two board lengths ahead in the anticipated direction of travel.

E stands for EDGING of the rails. Lean harder on a rail to increase the edge angle. Turning across eddy lines requires edging to the inside of the turn; similar to the banking of the wings of an airplane. The timing of the edging is critical. When entering an eddy from the current wait until ⅓ to ½ of the board crosses the eddy line before edging onto the inside of the turn (upriver side). When exiting an eddy into the current pre-load the inside edge (downriver side) during the set up and maintain pressure on it throughout the turn. Paddling and bracing on the edging side helps.

S stands for SPEED. Speed is required to prevent stalling out in the eddy line. Speed engages the fins which will track or arc based on the edging of the board. Generate speed with purposeful canted forward strokes on the approach and ride the momentum across the eddy line. Incorporate the other skills previously discussed to accompany the momentum into the turn.

S stands for STANCE, the foundation for all SUP maneuvers on the river. For pivot turns across an eddy line I prefer a surf stance and for carved turns a staggered stance. Step back the foot matching the turning side, this facilitates edging on the inside of the turn. For a right turn step back the right foot and for a left turn step back the left one. Regardless of stance, for maximum stability, stay as low as possible by flexing the ankle/knee/hip joints rather than bending at the waist.

How to Paddle Straight: Variations to the Forward Stroke 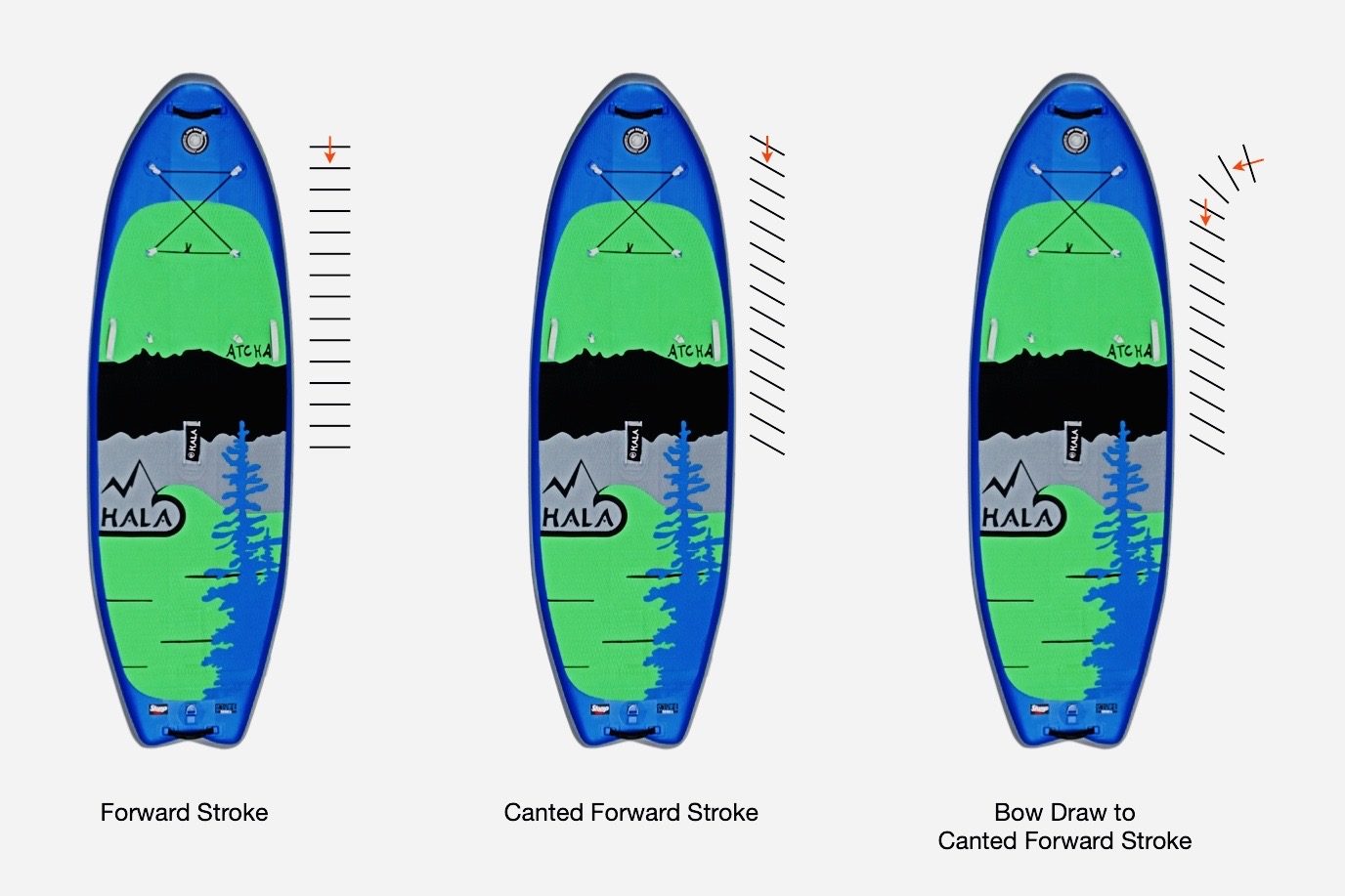